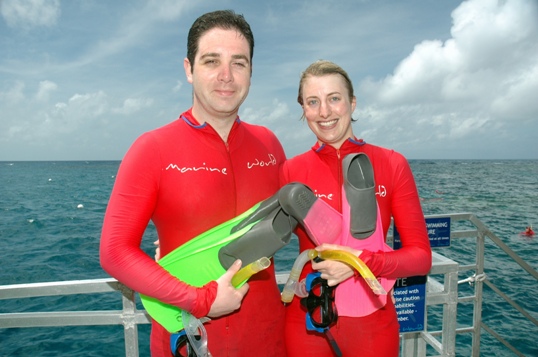 Those red suits are very much de rigueur here in Australia and, as you can see, they make us look pretty good.

Today we went on a cruise to the Great Barrier Reef and had our first scuba dive (closely followed by our second!). It took about an hour and a half to get there and when we arrived, the boat moored alongside a massive pontoon at Moore Reef which is about 70km from shore.

After some tea and biscuits, we climbed into those ridiculous outfits (to protect us from the jellyfish), donned our scuba gear and walked down to a submerged platform under the pontoon. The instructor went through some basics – how to pop your ears as you go down, how to breathe underwater etc. – and then we lowered ourselves down a rope into the water.
As this was our first dive, the four of us linked arms with the instructor in the middle and he guided us around the reef. It wasn't long before local celebrity Wally the Maori Wrasse swam up to us and introduced himself which is when this photo was taken of us giving him a stroke. Next we swam down to the bottom (about 6 metres) and passed around a sea cucumber which was similar to a land cucumber apart from being fatter and darker and breathing through it's bottom.
The 20 minutes seemed over very quickly so, as we climbed back out of the water and admired the marks left on each other's faces by our masks, we both started thinking about doing another dive.

After a great lunch and a stroll through the underwater observation thing to see the fish being fed, we signed up for our second dive.
This time we were allowed more freedom because after the 20 minute session in the morning we were seasoned professionals. The instructor swam ahead and we followed him along the reef wall, met Wally again and eventually found Nemo and his family swimming around an anemone.

Soon our time was up again and we waddled back on to the pontoon in our flippers.

At the end of the day we came back to Cairns and headed straight for this internet cafe so that we could show off our red suits (or at least the photo; despite Amy's protestations we weren't allowed to keep them).

That's all for now because we need to go and get some dinner!